This recipe has been a long time in coming, years actually. I’ve been trying out recipes for homemade flour tortillas for what seems like forever –  but I’ve never been thrilled with any of them. Definitely not thrilled enough to blog them – too dry, too sticky, too crisp, too bland, too soggy, too complicated. This time, with these flour tortillas, it’s different. They totally live up to their name – Best Ever Homemade Flour Tortillas! 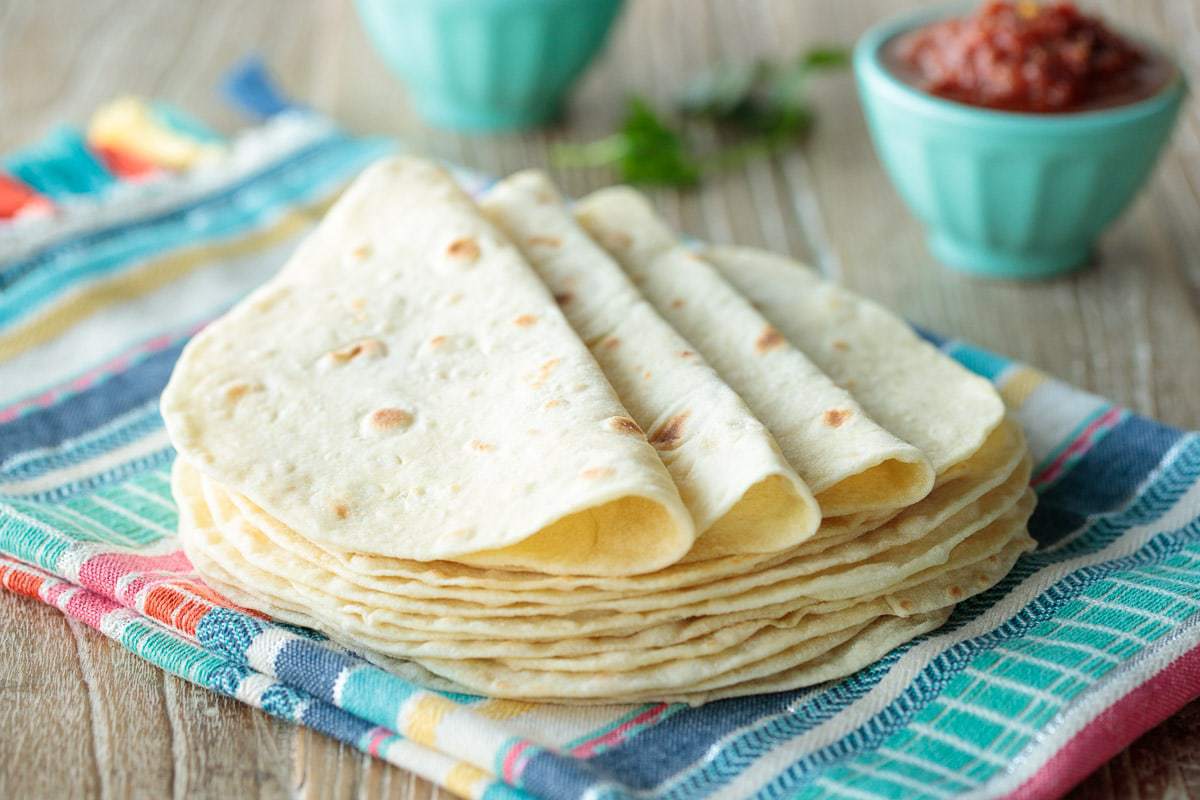 I LOVE the results, and I think you will too. These homemade flour tortillas are tender, soft and flavorful. Because they keep well, they can be made in advance and warmed in the microwave or on the stovetop, just before serving.

They’re also EASY, super easy! If you have a mixer with a dough hook, you can have the dough made in less than five minutes. You can also easily mix it together without a mixer (using a wooden spoon, sturdy spatula or Danish whisk), which is the way I usually make them. But whether you use a mixer or not, it’s super important to give the dough a little rest after mixing and dividing the dough. This helps relax the glutens, in order to make rolling the tortillas much easier.

Just portion the dough, give it a rest, then roll each piece nice and thin and give them a stint (one-two minutes!) in a medium-hot, dry pan. Voila! Once you take the first taste, you’ll NEVER want pre-packaged tortillas again

Ways to use these Homemade Flour Tortillas…

Imagine coming home after a busy day and having a stash of these tortillas (aka pizza crusts) in the freezer. Throw together a fresh salad and an individual pizza for each family member and they’ll be “WOWING” you all evening long!

Can you tell I’m excited about these guys? You will be too and I have a feeling, once you try them, you won’t want to be without a cache of these tortillas in your freezer. They’re almost too good to be true! Almost.

You can either make these tortillas with a stand mixer or by hand. I find it’s just as easy to put them together without a mixer. You’ll find directions for both ways in the recipe below but we’ve created a video to show you how easy they are to make by hand:

To make by hand:

1-Combine flour, salt and baking powder in the bowl of a stand mixer. Using the dough hook, mix dry ingredients until well combined.

2-Add oil and water with mixer running at a medium speed. After about 1 minute, or when mixture comes together and begins to form a ball, decrease mixing speed to low. Continue to mix for 1 minute or until dough is smooth.

3-Transfer dough to a lightly floured work surface. Divide into 16 equal portions. Turn each piece to coat with flour. Form each piece into a ball and flatten with the palm of your hand. Cover flattened balls of dough with a clean kitchen towel and allow to rest for at least 15 minutes (or as much as 2 hours) before proceeding.

4-After the rest period, heat a large pan over medium heat. Roll each dough piece into a rough circle, about 6-7 inches in diameter, keep work surface and rolling pin lightly floured. Don’t stack uncooked tortillas on top of each other or they will stick together. (I like to separate my tortillas with parchement paper.)

5- When the pan is hot, place one dough circle into the pan and allow to cook 45 seconds to 1 minute or until the bottom surface has a few pale brown spots and the uncooked surface is bubbly. If browning too fast, reduce the heat a bit. If it’s taking longer than a minute to see a few pale golden brown spots on the underside of tortillas, increase the heat a bit. Flip to other side and cook for 15-20 seconds. The tortillas should be nice and soft but have a few small brown spots on the surface.

6- Remove from pan with tongs and stack in a covered container or zippered bag to keep the tortillas soft.

7- Serve warm or allow to cool for later use. When ready to use, place a slightly damp paper towel in the bottom of a microwave-safe container (with a cover) that will hold the stacked tortillas. Microwave uncovered for 15-30 seconds (start with 15) or until warm, then keep covered to hold heat while serving.

8- Store in an airtight container or zippered bag at room temperature for 24 hours or refrigerate for up to 1 week. To freeze, separate tortillas with parchment paper or waxed paper and place in a zippered bag before placing in the freezer.